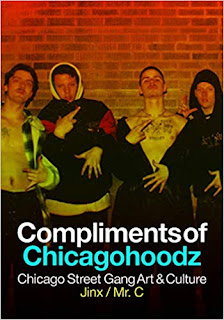 My grandson and his girlfriend just about freaked out when I showed them the copy of Compliments of Chicagohoodz that I had received from the publisher. As products of the Chicago Public Schools, they knew kids who had grown up in the Chicago gangs, and they both had stories to tell. First, I had them look at the book, and then they told their stories.

Compliements of Chicagohoodz tells the story of the Chicago street gangs, their art, and their culture from the 1950s until the early 1990s. The book is the product of the 25-year history project of James O'Connor who collected pictures and conducted interviews, photographed street art, and sorting memorabilla of the P Stones, the Vice Lords, the Gangster Disciples, the Latin Kings, as well as a host of other gangs around the city. 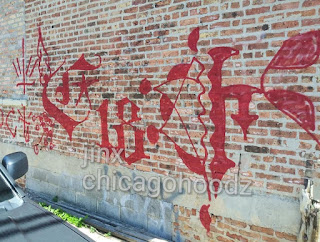 Somethinig neither young adult nor I knew about was the creation and distribution of gang business, or compliment, cards. The practice of creating and distributing street gang business (“compliment”) cards was popular in Chicago for over fifty years. These displayed the organization and branch, its active and fallen members, and rivalries. Compliments of Chicagohoodz tells the stories behind the names, bringing the reader closer to the individuals who created, owned, and added their personal touches to the card as it passed from hand to hand. Over 675 cards are shown with accompanying explanations. After reading the book, my grandson remarked that he was surprised to note that Chicago gangs in the past were so Medieval in scope and behavior. He said that reading the book was much like watching Game of Thrones: the rivalries, the conflicts, the posturing.

One of the stories my grandson told me was about his high school friend, Joseph. Joseph joined the Latin Kings as a 14-year-old, even though he was attending one of the select high schools in the city. He was hanging aroud with a friend one evening, when the kid pulled out a gun and started shooting at some kids from a rival gang. Joseph ran; my grandson didn't see him for a couple of years. It turned out that his parents put him in a car and drove him to a sister's house in Iowa City, Iowa the very night of the shooting.

I believe that while the audience for Compliments of Chicagohoodz is fairly limited, it certainly will be welcomed by anyone who grew up in Chicago. One reviewer summed it up: "Thick as a bible and going to blow minds." It certainly blew Max and Brianna's minds. The book is going home with them.

The book's Facebook page.
Posted by Miriam Downey at 6:29 PM

I loved your review of Cornelius Sky. You caught the essence of the book, its wry observations, the author's compassion for the character and his ability to change.

I have a book that I think you would like, The Caravan of Remembering, by Daniel Goodenough, fiction about a character's spiritual quest to find his authentic path in life. I'd be happy to send you more about the book, and a review copy if you like, print or digital.
The website for the book is: www.CaravanofRemembering.com.

I'd be happy to send you a copy so you can check it out.