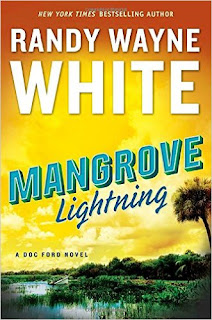 Well, I dropped into Doc Ford's life during his 24th adventure in Southwest Florida, Mangrove Lightning. I wouldn't suggest that you do that. Doc Ford, apparently, is a marine biologist and part-time spy and government mercenary. His home base is on Sanibel Island, but we meet him rescuing a member of the British Royal family who is in some trouble in the Bahamas. What that has to do with the main mystery is anybody's call, but it may have been unfinished business from some previous iteration. That's what happens when you meet a protagonist in his 24th mystery.

However, Doc Ford's presence is apparently not essential to the plot of Mangrove Lightning, because he only drops in now and again. What White wants to relate in this book is a well-researched 1925 mystery that took place in the area north of the Everglades around Marco Island, Florida. In those days, Chinese labor was smuggled via the islands, and there was a lot of bootlegging going on. Apparently, one of the main characters in Mangrove Lightning, Tootsie Barlow, a fishing boat captain is still haunted by the events of those early days, and his family's involvement in the damage that was done during those years. He believes that his young relatives are suffering from a family curse. The other protagonist, Tomlinson, tries to help Tootsie, but he is not a detective. (Apparently Tomlinson has a long history with Doc Ford.) Tomlinson is a practicing Buddhist and a bit of a pothead. However, he knows the history of the area, and when Tootsie's grandniece Gracie disappears, Tomlinson rises to the occasion and helps create the connection between the past and the present misfortune.

There's a lot going on, and it took me quite a while to figure it all out. If I had read other books in the series, I would have had an easier time putting it all together—particularly Doc Ford's spy business. I particularly liked the historical influences in Southwest Florida, and I spent quite a bit of time looking up the history of bootlegging in Florida, smuggled Chinese slaves, crocodiles and mangroves. Once I got acclimated to the characters and the setting, it was an intriguing read. The bad guys are really bad—vicious, violent killers, and once the action got rolling, I couldn't put the book down.

Sanibel Island is one of my favorite places on earth, but a couple of years ago, I spent a few days on Pine Island, which apparently is where Doc Ford lives—the same as Randy White. These are wonderful places with an incredible history. I could believe almost anything happening there. Randy White's love for the region—its past and its future—is of huge importance to him. Weaving the history of the region into his mysteries is one way of showing his love. This is a website that shows the area on Pine Island where White writes his books. He also owns a restaurant on Sanabel called Doc Ford's, of course.

Posted by Miriam Downey at 6:22 PM No comments: