Murder at the Book Group 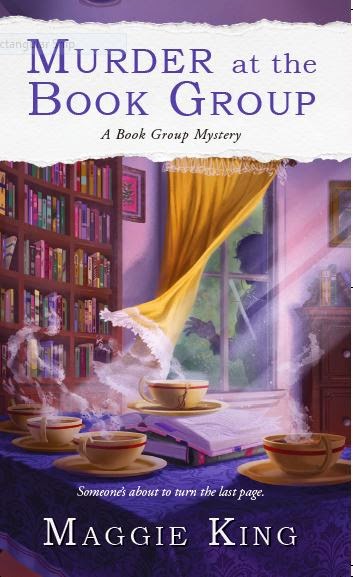 It is the third day of the new year, sleet outside, a quiet house, and a cozy mystery. Could anything be better? Without a care, I picked up Murder at the Book Group by Maggie King and looked up a few hours later, crime solved. My favorite lazy kind of morning.

Carlene and Hazel Rose are the co-founders of a mystery book club. The premise of the club is to read mysteries by geography (kind of an interesting idea). At the current meeting, they are reading mysteries based in Florida. (By the way, the book's setting is Richmond, Virginia.) Several of the members of the club are writers, including Carlene, a mystery writer, and Hazel Rose, a romance novelist. Half-way through the meeting, just after tea has been served, Carlene drops dead, an apparent suicide. No one at the meeting believes that it is a suicide, and later, police reports show that it is cyanide poisoning.

To Hazel Rose, the narrator of the story, it has to be murder, and every member of the club becomes a suspect as she seeks to ferret out the killer. It turns out that while many people know a little bit about Carlene, but not many people know (or have gossiped about) her propensity to have sex with any available man, even though she is married to Evan, Hazel Rose's ex husband. In other words, there are a lot of potential suspects who might have reason to want Carlene dead. Hazel Rose's method is to ask leading questions of the many characters and find out the shocking detail's of Carlene's life on her way to solving the murder.

Everything becomes very complicated and entangled and more and more characters pile into the plot line. I wished that I had kept a list of characters because I had to keep asking myself about who was who. Maggie King's website introduces you to the main characters with a little character study of each book club member. It's a nice touch and I wish I had found it before I read the book rather than after. You can find the character studies on her blog. This is probably the book's weakness—too many characters with too much information. It was hard to keep it all intact.

You would think from the plot line and the characters that you were in a small village rather than the capital of the state of Virginia. Everything is so intertwined, "Murder She Wrote" style. Hazel Rose is a bumbling sleuth, but we can see her skills developing as the mystery evolves, and there is a moment in Murder at the Book Group when we can see the mystery for her next case evolving.  The Cozy Mystery blog has a posting that describes what makes a cozy mystery. I was amused to note that in a cozy mystery, the crime-solver (usually a woman) has a best friend, husband, or partner who is a police officer, a medical examiner, or a detective. In this case, Hazel Rose is in a tentative relationship with a retired detective, Vince.

The review on the Shelf Awareness website concludes: "The amateur sleuth's pseudo-investigative skills and her interactions with a cast of well-drawn small-town characters reveal a deception that ultimately coalesces into a study of human nature and the limits of perception." To me it was a delightful introduction to a new year. I have been in a book group for ten years, and I am certainly glad that Carlene or Helen or Art or Annabel aren't in my group, although it wouldn't hurt to have Kat  there to spice things up a bit! Besides that, we drink wine at our book group. Cyanide tea is never an option.