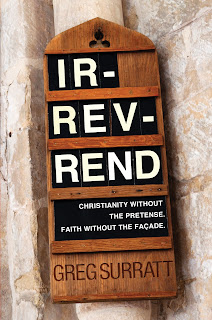 By Greg Surratt
New York, Faith Words, 2011
172 pages    Spiritual
Greg Surratt subtitles his book, Ir-rev-rend, Christianity without the pretense. Faith without the façade. He is the pastor of Seacoast Church, a mega-church in Charleston SC, and for sure Ir-rev-rend is a book without pretense or façade. Granted I was reading an uncorrected proof (the book came out on Sept. 28), and obviously the style of the physical book surely was spiffed up for publication, but I constantly had the question in my mind: Who did Surratt write this book for?
Each short chapter has a dictionary-style title, with a definition, and a couple of quotes that utilize the term—such as doubt, calling, money, and worship. Then, Surratt writes a rather far-ranging blog-posting type article about that topic. He includes scripture, personal experience, and opinion about the topic under discussion. He says about his book: “The stories deal with faith, hope, doubt, love, sex, money, politics and a bunch of other real life issues that we all wrestle with.”
Surratt writes with self-deprecating humor, which in some cases is downright funny. You have to believe in his authenticity and credibility. I think if I were listening to him give these chapters as sermons, I would be entranced by his generous personality and charisma. He must be an absolutely delightful person to be around.
It was not until I got to the chapter on worship (by far the strongest chapter) that I began to appreciate his religious understanding and his sensitivity. Over a short span of time, Surratt experienced religious awakening in several diverse ways, including a service at an Episcopal church (heaven forbid), and a visit to the Iona Community in Scotland. I know several people who have been to the Iona Community, so I was not the least bit surprised that he was extremely moved by the experience there. He also had an experience of an anointing as well as an intercessory prayer candle lighting. The very best part of these experiences was that Surratt realized that his congregation was missing some of these intense spiritual moments. He was humble enough to realize that the services at Seacoast Church may have been lacking in quiet, prayerful, and peaceful surrender. And, wonder of wonders, he incorporated some of those spiritual aspects into his Sunday morning worship experiences.  I wanted to put my arms around him and say, “Well done, thou good and faithful servant.”
I wish that Surratt had probed the Christian faith a little deeper. Although I never doubted his sincerity and authenticity, I was not convinced that he was a man of deep spirituality until the very end of the book. If it had not been for that chapter, I would have passed the book off as something nice but innocuous. I was reminded how astonished I was about the religious depth of Jay Bakker’s book, Fall to Grace. I had no such expectations when I began the book. Perhaps my expectations for Ir-rev-rend were too high.

I had to come back to my original question—who did Surratt write this book for? Well, for one thing, he pastors a church of 10,000 people. Each church member will want a copy of the book, and it will be a great introduction to their pastor. Additionally, fellow pastors will enjoy the book and identify with it—another audience. He says that he hopes the book will make “readers laugh, cry and push them toward Jesus.”  I hope it accomplishes that for him.
You may also want to read my reflections on the book In theLand of Believers by Gina Welch, a non-believer who attended Jerry Falwell’s church in Virginia for several years in order to understand evangelical Christianity.
Here is Greg Surratt’s website and blog: http://gregsurratt.org
An interview in the Post and Courier, Charleston’s newspaper: http://www.postandcourier.com/news/2011/aug/28/28surratt/
You can hear Greg Surratt here: http://www.youtube.com/watch?v=AumUivf3cVU
The book’s facebook page:  http://www.facebook.com/irrevrend
Posted by Miriam Downey at 8:31 PM