Murder at the Moonshine Inn 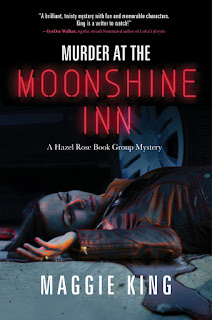 Ok! So it's election night and I am absolutely frantic. Are you?  What better thing to do than to read and review a fun mystery. How about a cozy? How about Murder at the Moonshine Inn?

Hazel Rose is a romance novelist and a member of a Richmond VA book club. This particular book club reads mysteries. Several years ago, the members of the book club were shocked when one of their members was murdered. Hazel Rose and her book club friends solved that murder in Murder at the Book Group, the first book in the Hazel Rose Book Group mystery series.

Now, I have a really nice book group, but it isn't anything like Hazel Rose's! When Roxanne Howard, a local nonprofit executive, is found dead at the Moonshine Inn, her sister asks Hazel Rose if she can help to find the killer. The police have focused on her husband Brad, who just happens to be a cousin of Hazel Rose. (Actually Hazel has cousins all over the place and they all play a role in the mystery.) The police, however, can't seem to pin the murder on Brad. Hazel reluctantly agrees. She's not sure she's up for another murder investigation.

The book group decide that they want to be part of the investigation, so Hazel enlists them. Everyone has a detective job to do, and they meet weekly via Skype to compare notes and decide on strategy. The investigation gets serious when Hazel Rose and her husband, Vince, a former police detective, dress up like rednecks and visit the Moonshine Inn, where the murder occurred. Everyone is talking about a strange man who has been seen around Roxanne and was at the Moonshine Inn on the night she was murdered, but no one can figure out who he is.  And then someone else is murdered!

Murder at the Moonshine Inn is more humorous than its predecessor. Most likely Hazel Rose is getting her footing as a detective and Maggie King is getting her footing as an author. The good thing about Hazel Rose is that she doesn't take herself too seriously. For example, someone says that they love her romance novels. She thinks, "Doubtful. I had my fans, but more than a few looked down their noses at what they deemed my drivel with no redeeming social value. Thankfully, scores of folk were fine with non-redemptive drivel." And then when she is stymied, she thinks, "What would Nancy Drew do?"

Indeed, what would Nancy Drew do? Well, with the help of her husband and her book club crew, Hazel Rose bungles her way into solving the crimes. Maybe not as smooth as Nancy Drew, but a crime solver, none the less.

Hazel Rose is a thoroughly delightful character, and when I look at a picture of Maggie King, the author, I see Hazel Rose the detective. I was honored when Maggie King asked me to read and review her second book. I enjoyed these murders as much as the first, but I don't believe the books need to be read in order. So, cozy up to a delightful cozy mystery. Well, actually, cozy up next week, when the book is released.

Posted by Miriam Downey at 8:51 PM