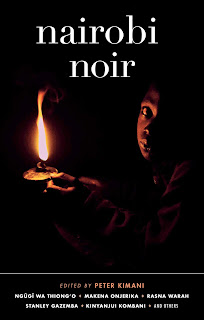 The newest Noir short story collection by Akashic Books is published today. Nairobi Noir has three parts: The Hunters, The Hunted, the Herders. Each story in each section takes place in a unique area of the city.

Kimani is quite a well-known African author, who obviously knows Nairobi intimately, and after I read his story “Blood Sister,” I realized that he was the perfect person to edit the book.

The introduction to Nairobi Noir is especially impressive. Kimani calls it “Concrete Jungle.” He says that in Nairobi, “traffic jams are so bad, even lions come out of the wild to marvel at the snarl-ups. This is no exaggeration; Nairobi is the only city with a game park, and the kings of the wild occasionally stray on major city highways to kill boredom. . .” It is one of the most unequal cities in the world, and the stories in the collection expose that huge inequality.

The first story is called “She Dug Two Graves” by Winfred Kiunga, and it is absolutely heartbreaking in its rawness. A young man in the Muslim neighborhood is killed, and his sister, Fawzia, is heartbroken. Somali refugees, the two young adults had shared a home, and Fawzia had helped to raise her brother. Ahmed was just one less Somali Muslim that the Nairobi police have to deal with, but there are a group of terrorists, with revenge on their hearts, who seek to enlist Fawzia to their cause. The results are painful to read as Fawzia seeks vengeance on the deputy Police Commissioner.

The ending of the story “Number Sita” by Kevin Mwachiro is particularly poignant, when the lives of some young men living communally are saved from the police by a group of women who place their bodies over the prostrate bodies of their sons and neighbors.

On the other hand, the story by Kimani called “Blood Sister” is a delight. Bobo, or Bob, is a swaggery young guy in the hood neighborhood called Karen. The reader can instantly recognize the type. Told in the first person, we see how Bobo goes about impressing the neighborhood and impressing the outsiders who come to document the activities of the neighborhood. Two women, one old and one young, are sufficiently impressed with Bobo that they call upon him to help with their efforts. The older woman is up front with what she needs from him, while the young woman hides her purposes. Is the story traditional noir? Probably not, but it is a fascinating story.

Nairobi Noir follows the highly successful Akashic formula, which focuses on one city per book. I have read and loved several previous books, including Montana Noir, Vancouver Noir, Lagos Noir, and Milwaukee Noir. To show you the quality of the stories in the Noir series, one story “There’s a Riot Goin’ On” from the Milwaukee Noir collection just won a special recognition from the Edgar Awards for 2020. I have five more books on my pile, Tampa Bay Noir, Alabama Noir, Berkley Noir, Columbus Noir and Santa Fe Noir. Can’t wait to delve into all of them.

Posted by Miriam Downey at 5:22 PM