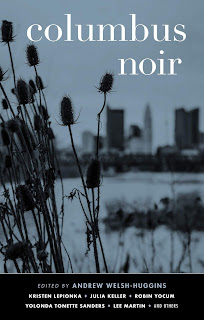 Columbus, Ohio, is a city that I know fairly well. My son, his wife, and my grandchildren lived there for several years when the children were young, and I currently have a niece and a nephew who live there, as well. So, the neighborhoods are familiar to me—especially German Village, which houses The Book Loft, one of the largest independent bookstores in the country.

Thus, I approached Columbus Noir, the new edition of the Akashic’s noir series with anticipation. The introduction was very appealing. The book’s editor is a journalist and author, and I really enjoyed his introduction to the idea of the ordinariness of Columbus, a concept that apparently no longer exists. He says, “Those who consider the old Columbus a comfy couch conveniently ignore the guns and knives that were hidden under the pillows.”

The collection contains 14 stories from 14 authors, including Welsh-Huggins. While the stories range in both content and quality, the most common aspects are sex and greed. Of course, some of the stories take place at Ohio State University, the pride of the state and the arch nemesis of the University of Michigan. Two of the stories introduce the reader to The Satin Fox, which must be a notorious strip club.

A story by Daniel Best is a great introduction to the well-known Short North neighborhood, and Welsh-Huggins story concerns the governor and his security guard/driver. The governor is on the short list to be Vice President, and his philandering must be covered up. A great story, by the way.

There is a very good interview with Welsh-Huggins in the Columbus Monthly. About Columbus as a setting for noir fiction, Welsh-Huggins says, “Columbus is the perfect noir package. On the ‘good’ side we have iconic neighborhoods, a diverse population, a strong economy and all our foodie and arts and fashion trend-setting. On the ‘bad’ side we struggle with opioids, street violence and political corruption. To top it off, we have a chip on our shoulders after decades of being looked down upon as ‘Cowtown,’ which sometimes makes us overeager to reach for the stars, with all the light and dark consequences of such striving.”

It's been my pleasure to review several of the Akashic Noir books over the past couple of years, and I have several more coming up. I like them because I am so curious as to the variety of interpretations of the term “noir, “ the variety of settings, and the vast numbers of authors who have contributed.
Here are some of my reviews: Montana Noir, Nairobi Noir, Vancouver Noir, Milwaukee Noir.

Posted by Miriam Downey at 5:15 PM

Thanks for sharing this blog with us. These Jackets are really amazing. Women’s Leather Jacket Must visit us !!