The First Conspiracy: The Secret Plot to Kill George Washington 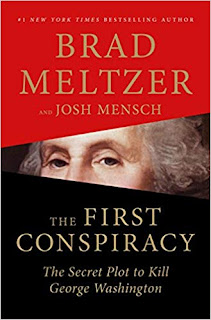 It was “a clandestine plan to strike a knife into the heart of the rebellion.”

Thriller author, Brad Meltzer, became fascinaed with a footnote in a book he was reading. It suggested that there had been a plot to kill George Washington during the Revolutionary War. The act was to happen after the General and his men arrived in New York City in the spring of 1776. Buried in history, this incident became the incentive for Meltzer to talk to a Washington scholar who knew a little bit about the plot but had never researched it. Thus began the journey to The First Conspiracy, a collaboration between Meltzer and documentarian Josh Mensch.

New York was a loyalist stronghold. The governor Williom Tryon was living on a boat in the harbor, waiting for the British forces to arrive in the city, squash the rebellion, and take the country back. To make sure that it was going to happen, the Governor and some of his cronies hatched a plot to recruit some of Washington’s “life guards”—soldiers who were responsible for the General’s safety--to kidnap or kill the General. Indeed, some of them were recruited, including a man named Thomas Hickey. The plot got foiled when a couple of the life guards were jailed for having counterfeit money and told a cellmate about the plot. Hickey was arrested and ultimately hung before an audience of soldiers and New York citizens. The crowd was estimated at 20,000. 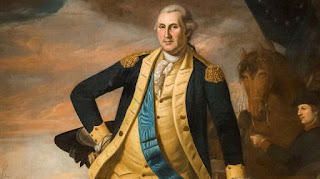 Of course there is much more to the story. One of the subplots is about the counterfeiting ring, and another is about a mill foreman from upstate New York who arrives in the city to search for some missing workers who had been recruited by the Loyalists to fight with the British army. The historical information includes a lot of material about the tremendous character of the man who was leading the troops, George Washington. We also learn a lot about the ragtag army that he had to lead to victory. 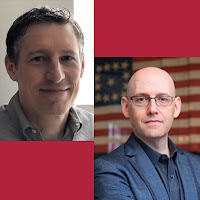 With Meltzer in the driver’s seat and Mensch doing the research, the story is both a potboiler and a history lesson. For example, we didn’t know that New York City was pretty much a Loyalist hangout. We knew nothing about Governor Tryon nor about the British ships arriving in New York Harbor. There are lots of familiar names, John Jay, Alexander Hamilton, and John Adams among others. (Of course, we all have had our history refresher because of the musical, Hamilton.) Although some of the reviewers felt that the book read too much like a thriller, no one doubted the research that went into finding this lost bit of American history. For example, these “life guards” became the modern Secret Service and its counter intelligence unit. John Jay, in fact, was in charge of a secret intelligence subcommittee that interviewed the plotters and those who turned them in. Most likely the beginnings of the CIA.

Reviewers complained about the cliffhangers that end each chapter, but because my husband and I were reading the book aloud to each other every morning, the cliffhangers just kept us moving ahead, often causing us to remain at the breakfast table a lot longer than we should have.

So, if you love thrillers or history or nonfiction or biography you will love The First Conspiracy. Here is a video of the authors on C-Span.
Posted by Miriam Downey at 9:22 PM No comments:

The Sun Does Shine: How I found life and freedom on death row 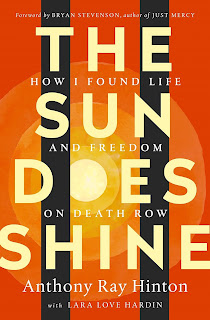 “The kind of justice a criminal defendant has cannot depend on how much money he has.”

The Sun Does Shine is Ray Hinton’s memoir of his 30 years on death row—waiting to die for crimes he did not commit. His only crime was being born Black in Alabama. Hinton was accused of robbing and murdering restaurant managers during the same time that he was at work as a custodian. And the crimes were apparently committed with a gun found at his mother’s house—a gun that hadn’t been fired for 28 years.

Hinton was convicted and sentenced to death. He spent nearly 30 years on death row in the Alabama state prison. Eventually, he got the attention of a prisoner advocacy group that worked for years to clear Hinton’s name. It seems impossible to believe that it could take that long, but there were several false starts, as well as several times the system shut the appeals down. It was Hinton’s faith in his own innocence and his growth and learning about the justice system that brought him to a famous lawyer, Bryan Stevenson, whose faith in Hinton caused the case to be dropped and in 2015, Hinton went free.

This book would be very hard to read were it not for Hinton’s personality, his marvelous character and his rock solid faith in God. He had a presence on death row that was felt by everyone with whom he came in contact. First, his mother was the backbone of his life; he has a lifelong friend named Lester who came to see him every week; and the guards and the warden became his friends and supporters. Hinton offered care to all the other prisoners on death row, and even arranged for a book club to give the death row prisoners something more to think about than their impending deaths. 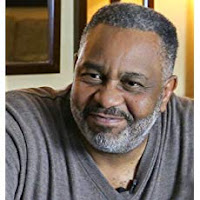 Now that he has been released, he has become an advocate for prison reform as he speaks around the country. He works with his lawyer helping other prisoners, but most importantly, he has taken hate out of his life and out of his heart. He has forgiven everyone responsible for the brokenness of the justice system. His life has become an inspiration for everyone with whom he comes in contact.

I didn’t want to read this book and struggled much of the way through it. My church book group is reading the book for this month’s meeting, and I felt compelled to read it.  I’m glad now that I persisted. I am grateful for those advocates who are fighting to change the justice system and grateful that Hinton is alive to tell his story and continue the fight for justice.

The Sun Does Shine was on the New York Times bestseller list for several weeks and was one of Oprah’s book picks. Hinton has appeared on several television shows. Here is a video that was on ABC news at the time of his release. It is difficult but yet inspiring to watch.

Posted by Miriam Downey at 10:23 PM No comments: 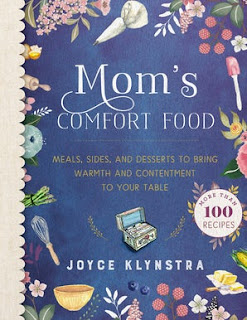 When cooking for a family, most people want recipes that will be appreciated by everyone—picky eaters included. Joyce Klynstra has collected 50-years-worth of her best recipes, compiled from recipe cards, her wedding cake business, and church suppers. The chapters are divided into classifications that you would expect, but also include chapters on classic Christmas recipes as well as advice on canning and freezing. The sub-title of the book says: “Meals, sides and desserts to bring warmth and contentment to your table.”

I instantly connected with Klynstra. She is about my age, lives in Lansing, Michigan—just slightly north of me —and has cooked and collected recipes her whole life. Unlike me, she got her training at a drive-in in Allendale, Michigan. A couple of the recipes come from that drive-in. Most of my training came from Mom, Grandma, and my ever-efficient Mother-in-Law.

The thing I liked the most about all of the recipes is that they can easily be created for a family supper or a holiday brunch. Many of the ingredients might already be on your shelves or in your freezer. She uses a lot of local produce. For example, some lovely dishes are created with asparagus, easily available in the spring in Michigan. (Hey! It’s April! Asparagus season is almost upon us. Hallelujah!) The first recipe that caught my eye was the very first recipe in the book: Asian Meatballs cooked in a very simple and delectable teriyaki sauce. I found several recipes that are similar to ones I make. My chocolate chip cookie recipe—exactly.  More importantly, I found a lot (and I do mean a lot) of recipes that I plan to try in the next few weeks. 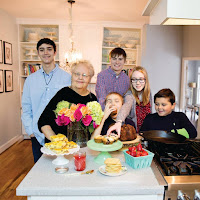 What sets Mom’s Comfort Food apart from many other cookbooks are the photographs of the foods as well as photos of Klynstra’s grandchildren holding their favorite foods that Grandma makes. Laura Klynstra, Joyce’s daughter, is a well known book designer. When I looked her up, I saw that she designed several of the books that I read this year, including Lilac Girls, Small Great Things, and White Houses. When you look at her books, you realize how important the design of a book is to its appeal.

Several years ago, my sister and I put together a cookbook of family recipes including family pictures and some family history. It was such a joy to create, and I can only imagine how much fun Joyce and her daughter had creating the book.

Mom’s Comfort Food is a treat to the eye and the palate.

Under the Tuscan Thumb: How "Building Dreams in Tuscany" Turned Into a Nightmare 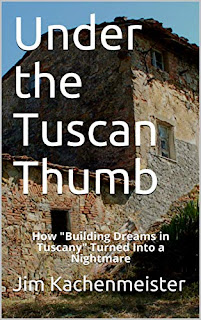 My friend, Patricia, has shared with me all the marvelous things that happen when she is at her vacation apartment in Lucca, Tuscany, Italy. She just sent me her friend Jim’s memoir of the 15 years, he and his wife Debbie have spent in this marvelous region—but the beauty of the city and countryside are only part of the story he is telling. Some of it has been a nightmare.

Part memoir, part travel narrative, part horror, and part diatribe, Kachenmeister tells the story of how he and his wife gave up their jobs to move to Lucca—planning to live a quiet life there. Once there, Kachenmeister got itchy to own some of the ancient properties that dotted the landscape. He and a couple of partners decided to buy properties and create homes and condos for other expats and vacationers. Enter Italian bureaucracy and global recession. I won’t go into detail about all the problems that ensued, but believe me, less hardy people would have escaped in the dark of midnight—oh, wait, some actually did!

The title, Under the Tuscan Thumb,  is of course a take-off of the love song to Tuscany named Under the Tuscan Sun by Frances Mayes and the movie by the same name. Much of the book is written in good humor, but there are hints of the despair Kachenmeister and his team felt when the economy and their plans tanked in 2008 and 2009. Interspersed with this tale of woe are lighthearted and touching moments, as well as memoir-style looks at Kachenmeister’s life prior to the move to Italy. Another section tells of playing golf in Italy, while another far more interesting section tells of the annual olive harvest and their own private brand of olive oil.

The couple tried in vain to sell the apartments and farm houses they purchased, but they changed course and now run them as VRBO rentals. He speaks about how much he loves sharing the properties with the families that come to vacation on his beloved properties. Look at the book’s website for before and after pictures of the property called Il Borghetto in San Gennaro where there are 5 apartments for rent, available on VRBO. Wow! I want to go there.

Under the Tuscan Thumb is available on Amazon.

Posted by Miriam Downey at 8:46 PM No comments: