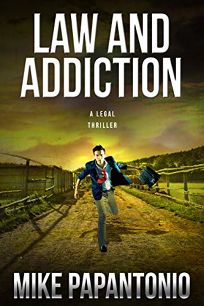 Lots of books are advertised as “torn from today’s headlines.” But Law and Addiction actually is.

Here is the summary:
“One week before Jake Rutledge is scheduled to graduate from law school, he receives the devastating news of the death of his fraternal twin, Blake. What makes this death even more terrible for Jake is that his brother died of a drug overdose. Until hearing of his death, Jake had no idea his brother was even using drugs.
When Jake returns home to Oakley, West Virginia, he takes a hard look at the circumstances of his brother's death. In the five years Jake has been away for his schooling, his hometown has drastically changed. Because of the opioid epidemic and the blight it has brought, many now call Oakley "Zombieland". Jake can see how his town's demise parallels his brother's.
Undeterred, the newly minted lawyer takes on the entrenched powers by filing two lawsuits. Jake quickly learns what happens when you upset a hornet's nest. The young attorney might be wet behind the ears, but he is sure there is no lawyer that could help him more than Nick "Deke" Deketomis and his law firm of Bergman/Deketomis. Deke is a legendary lawyer. When he was Jake's age he was making his name fighting Big Tobacco. Against all odds, Jake gets Nick and his firm to sign on to his case before it's too late.”

Jake is an appealing protagonist. He is modest, unassuming, and trusting. He is willing to accept the advise from Deke Deketomis, the lawyer who has appeared in Papantonio’s other novels, Law and Disorder and Law and Vengeance. Jake is also ambitious, because of his willingness to take on the “Big Three” drug companies while at the same time taking on a smaller local case for his high school “crush.” Jake soon realizes that the role of the lawyer is essential in cases such as these. “What was rarely acknowledged was the unofficial oversight role that was increasingly filled by lawyers, Without the potential threat of legal action, important checks and balances wouldn’t exist, especially in light of increasingly lax government oversight.”

My feelings about the plotline, the characters, and the writing is similar to that of the Publisher’s Weekly reviewer: “Readers, however, will have to look past wooden characters, the stilted dialogue, and the statistical information dumps to get to the novel’s well-intentioned core. Papantonio makes a passionate if clumsy case for the need to do more to fight opioid addiction.” 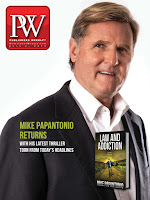 It is certainly a timely book. Just yesterday, the Purdue Pharma bankruptcy was front page news as word that the Sakler family, owners of the largest manufacturer of opioids, had raided the company coffers when they realized that the company was going down. And in Sunday’s New York Times, Nicholas Kristoff had a heartbreaking editorial about babies in West Virginia who are born addicted. Fourteen percent of babies born in West Virginia are born exposed to drugs and another five percent more are exposed to alcohol—that’s about 20 percent of all babies born in that state.

Papantonio was on the cover of the July 1 issue of Publisher’s Weekly. He is certainly carving a niche for himself in the legal procedural genre. 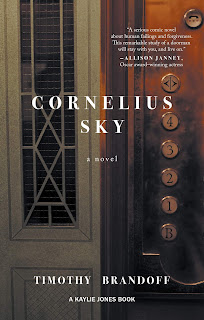 New York in 1974. Cornelius Sky (Connie) is a doorman in the building where a former First Lady and her son (think JFK Jr.) live. Connie hangs out with the teenage boy, tries to keep him safe from the prying eyes of the paparazzi, and offers him companionship and solace. Otherwise, Connie’s life is a mess.

He has estranged himself from his wife and his two young sons by his alcoholism, and finally his wife changes the locks, and Connie is out on the mean streets of the city—a city that seems to be falling apart right before his eyes. While he prides himself on his job and the great job he does buffing the marble floors, for example, he is haunted by his own past. This may be why he attaches himself to the fatherless boy and ignores his own sons.

Cornelius Sky is a superb character study, with vivid observations of Connie’s tumultuous life and the tumultuous city where he lives. Frankly, I loved Connie, in all his bruised glory. While I didn’t love the way he treated his family, I loved the way others saw the good in Connie and offered him redemption.

Most importantly, the author Timothy Brandoff is an astute observer of the human condition, and I found myself underlining entire passages of brilliant writing that moved my heart. For example, here is a description of the people in the bar Connie frequents:

“Longshoremen, mailmen, factory workers, auto mechanics, truck drivers, the unemployable, a couple of wet-brains, a misanthropic PhD or two hiding behind what they hoped people would consider academic beards of distinction, flabbergasted occupants of Chelsea’s swankier brownstones because their lives still somehow sucked despite impressive curriculum vitae and substantial earning power—all stood and drank at the bar together."

224 pages is a fairly short book but is an absolutely perfect length for Connie’s story. The Kirkus review concludes that “its detailed portrait of a self-destructive character retains a haunting power.” The reviewer is absolutely right about the “haunting power.” I read Cornelius Sky several weeks ago, and it has remained with me.

Timothy Brandoff has an interesting personal history. He wove together details from his own life as he created the character of Cornelius Sky.  He is a New York City bus driver and a former doorman, following the career path of his uncle and brother. He suggests, however, that while there are aspects of the book that follow his own life’s path, he hopes that the story is “true to itself.”

I hope that Brandoff will tell more stories of the characters he meets as he drives his bus through the city.

Posted by Miriam Downey at 8:25 PM No comments:

The Second Worst Restaurant in France 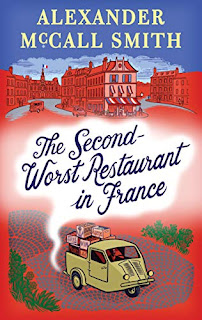 Paul Stuart is a Scottish cookbook author. He first appears in the book, My Italian Bulldozer, which I have not read. While that book has Paul writing a food guide to Tuscany, he is now under contract to write a larger tome about the philosophy of food—a task that is formidable, and he is having trouble getting a handle on the topic.

Paul is an appealing character because, above all, he is very accommodating and understanding. We find out very early in The Second Worst Restaurant that he is not fond of cats, and he is driven away from his home by his girlfriend’s cats. A cousin, Chloe, offers to take him with her to a small village in France where she has rented a house. Paul thinks that if he separates from his girlfriend and her cats and goes to a quiet place, he might make some progress on writing his book.

When they get to the village, Paul finds that it has little to offer except a very good bakery and a very bad restaurant. Some actually consider it to be the “second worst restaurant in France.” Paul takes on the task of improving the restaurant because one of the cooks actually is quite talented. This part of the plot reads like a Restaurant Impossible episode. But again, we don’t read McCall Smith books for their sterling plots.

We read his books for characters like Chloe, who is brilliant, annoying, and memorable. Paul remarks that Chloe is a throwback to earlier times “when people made tactless remarks and rarely apologized for what they were.” Chloe can talk about everyone and everything, but Paul finds himself worrying about how much truth there is in her endless commentary. I think that Chloe is a remarkable character, and I found myself appreciating everything she had to say. Here is one quote I enjoyed: “I read the other day about a Corsican saint called St. Baltazaru of Calvi, who performed the miracle of changing wild boar into sausages without benefit of a charcutier. Apparently, he just had to touch a wild boar and it would become sausages—just like that.”

McCall Smith is an extremely prolific author of several series, all with delightful characters. The books are all a lot of fun. My favorite series remains The No. 1 Ladies Detective Agency books, which are based in Botswana, where McCall Smith taught Law at the University of Botswana.

I needed something light and fun to read on a long plane ride, and The Second Worst Restaurant in France was perfect. It almost made me want to head to France to seek out the restaurant and see how much it had improved.

Posted by Miriam Downey at 9:49 PM No comments: