Family in Six Tones: A Refugee Mother, an American Daughter 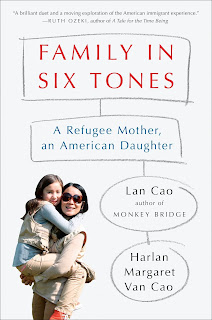 An introduction to the book: “In alternating narrative chapters between mother and daughter, two women write about their past and families in this literary memoir. Lan, the mother, came to the U.S. as a 13-year-old refugee. Harlan, her daughter, struggles to make friends and come into her own. The two women narrate their intense struggles as they each form their own identities.”

Family in Six Tones is a striking memoir, for the most part because Lan Cao is an excellent author. She was born in Vietnam and fled the war when she was 13 in 1975. Her daughter Harlan was born in Virginia in 2002, so Harlan is in her teenage years as the mother-daughter duo write this book. After Harlan is born, Lan Cao faces the challenge of not just surviving and succeeding on her own, but now she is responsible for helping this young American-born child survive and thrive.

I kept underlining passages that I found particularly appealing. Passages particularly in Lan Cao’s portion of the narrative. She has the ability to put thoughts into words that are both heart-rending and relatable. Harlan’s story, while very different from her mother’s, is also appealing in a bratty-daughter kind of way. I kept thinking, “Gosh, I’ve already been through this several times with my daughter and my young adult granddaughters. I don’t need to go through this again.” This thought is echoed by the Publisher’s Weekly reviewer who mentions that Harlan’s experiences are “thin.” On the other hand, not very many teenaged girls are able to express their issues with their mothers quite so eloquently. The Kirkus reviewer says, “What makes this memoir especially compelling is the way these two separate but linked perspectives illuminate silences or gaps in the stories that each woman tells.” 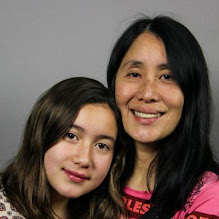 Lan Cao’s memoir tells a refugee story that is totally relatable, and it meant a great deal to me because of my trip to Vietnam a year ago, when we experienced the aftermath of a war that continues to reverberate in that country. Harlan relates how she sees the war resonating in her mother all these years later. Their trip to Saigon together helps to heal both of their wounds and find some common ground. Whatever the weaknesses of the joint narration, there are moments of profound meaning for the reader.

In 2015 when Family in Six Tones was just an idea, the two did a Story Corps interview which is especially interesting. You can listen to it here.

Posted by Miriam Downey at 5:06 PM