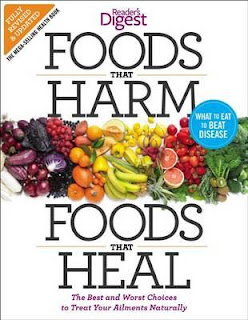 My daughter's mother-in-law is an herbalist and nutritionist. She knows all there is to know about herbal and nutritional healing. If you have something physical bothering you, you just call her and she tells you what to do.

Not everyone can have Janice around to tell you what to do and what to eat. The next best thing is Reader's Digest Book's Foods that Harm; Foods that Heal: What to Eat to Beat Disease. It is a handy-dandy guide --very easy to follow with lots of good advice. This is a revised and updated version of a book that has been around for a long time. It is very colorful, very complete, and extremely useful as a family guide.

I did not read this book cover-to-cover. There is no need of that, although I think that a purist like Janice would find it fascinating. The best thing about Foods that Harm; Foods that Heal is I can just pick a topic that I am concerned about and I can find lots of good advice about what to do or eat. Yesterday we used it because my husband asked me what the nutritional difference was between head lettuce, which he prefers, to romaine, which I prefer. I got out Foods that Harm; Foods that Heal and read to him that romaine has five times as much beta-carotene and vitamin C as head lettuce. End of one family argument. The book contains an excellent guide to food-drug interactions; useful tips for cooking foods that you don't generally eat; and what foods to stay away from if you suffer from common ailments. Additionally, it is full of fun facts. For instance, did you know that most commercial chocolate has less caffeine than a cup of decaffeinated coffee?

I think that most households that are concerned about the food that they eat will appreciate having a copy of Foods that Harm; Foods that Heal among their kitchen cookbooks. I received my copy from the publicist.
Posted by Miriam Downey at 1:22 PM No comments:

So, today's Shelf Awareness had an update on the Persepolis banning. Read on. . .

Chicago Public School administrators withdrew the graphic novel Persepolis by Marjane Satrapi from the seventh grade curriculum because of "graphic images of torture (depictions of a man urinating on another and placing a hot iron on another's back), as well as obscene language," a lawyer for the school board explained in a letter responding to a letter last week from a group of free speech and First Amendment organizations, including the American Booksellers Foundation for Free Expression and the Kids' Right to Read Project of the National Coalition Against Censorship.
In the letter, Lee Ann Lowder, deputy general counsel in the law department of the Chicago Board of Education, also argued that the board has "broad discretion" to determine school curricula and that removing Persepolis from seventh grade curriculum does not violate the First Amendment. She noted that the board is still considering "whether and how Persepolis will be used in the eighth through tenth grade curricula."

While I may agree that 7th grade may be a little young for Persepolis, it most definitely appropriate for grades 8-10. I will restate again my main premise that children who witness violence every day in their city need to have assurances that they can survive violence and can grow to be strong, successful people despite the violence around them. Persepolis offers them that experience

If an accurate depiction of war is too graphic in Persepolis, how then do we respond to Maus or Red Badge of Courage or Night?

What do you think?
Posted by Miriam Downey at 10:20 AM No comments:

Persepolis Banned in Chicago. What?


As a former librarian, I am always interested in banned books and the reason for their banning. In yet another short-sighted move by a public school district, the banning of the book Persepolis from the Chicago Public Schools 7th grade curriculum seems to be arbitrary. My book club read the book in 2010 and I also watched the movie, which won an Oscar in 2008. As a matter of fact, I gave the book to my 8th grade grandson when I was done reading it. I found it to be profound and a terrific example of a graphic memoir.

What I find remarkable about this whole situation is that Chicago has one of the most diverse populations in the country, and the experiences of the author, Marjane Satrapi when she was about 12 during the Iranian Revolution would seem to be age appropriate as it offers a view of a culture at war. Additionally, the violence in the book is not so far removed from the violence Chicago children are exposed to on a daily basis. I would think that it might be comforting for children of 13 or 14 to read about how a young girl survived the violence in her country.

My grandson read Our America: Life and Death on the South Side of Chicago as part of his ninth grade Chicago school curriculum. In that book, two ten year old boys dropped a 5-year-old off a roof in the neighborhood where my grandson goes to high school. How could Our America possibly be more respectable than Persepolis? i probably shouldn't speak too loudly or they will ban that book, too.
This article about the banning appeared in today's Shelf Awareness newsletter. Here is my blog entry about the book.

Persepolis Ban in Chicago Boosts Graphic Novel's Sales
Following the Chicago Public Schools' ban last week on Marjane Satrapi's Persepolis for "graphic language and images," the graphic novel and its two sequels saw a dramatic spike in sales over the weekend in the Windy City, DNAinfo.com reports.
Last Friday, the CEO of the public school system, Barbara Byrd-Bennett, ordered that the series be removed from the seventh grade curriculum, and announced that CPS would also be "reconsidering its [Persepolis] use for 8th through 10th graders." The decision met with immediate backlash from First Amendment activists, booksellers, Chicago residents and educators.
"The book is highly regarded by educators and has been taught successfully in schools in Chicago and around the country," said Joan Bertin, executive director of the National Coalition Against Censorship. "In our view, the decision is both pedagogically unsound and constitutionally suspect."
NCAC sent a letter to the Chicago Board of Education condemning the move and stating, in part, "The title character of Satrapi's book is herself the age of junior high school students, and her description of her real-life experiences might well have special relevance to them. The vast majority of Chicago middle school students are surely aware of the reality of violence and its devastating effects on people of all ages. Most have witnessed it on the news, if not in their own neighborhoods." The letter was co-signed by the American Booksellers Foundation for Free Expression, the Association of American Publishers, the Comic Book Legal Defense Fund, PEN America Center and the National Council of Teachers of English.
Many Chicago-area bookstores, including the Book Cellar in Lincoln Square, Quimby's in Wicker Park and Women & Children First in Andersonville, told DNAinfo that they were sold out by the end of the weekend.
"Whatever we had, we sold," said Suzy Takacs, owner of the Book Cellar. "It just didn't occur to me that [the controversy] would result in sales of the book. It's not new."
"It's a great graphic novel. I also think it's an important book," said John Khosropour, a bookseller at Unabridged Bookstore in Lakeview. "Whenever something gets banned, we kind of like to push it more."
Despite the sales spike, Lynn Mooney of Women & Children First, saw nothing to be thrilled about in regards to the censorship. "There's no joy knowing this is going on in our city. It's embarrassing."

Posted by Miriam Downey at 5:00 PM No comments: