Our America: Life and Death on the South Side of Chicago 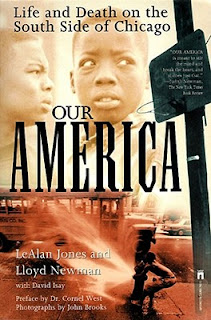 By LeAlan Jones and Lloyd Newman
New York, Pocket Books, 1997
203 Pages     Non-Fiction
As I was driving my grandson Maxwell to ChiArts High School in Chicago two weeks ago, he said: “Grandma, I want you to read this book. It is awesome!”  We drove down Cottage Grove heading north from Hyde Park and passed an area of open fields and a new development of town homes and apartments. Maxwell said that this was the area where the Ida B Wells Housing Project used to be and where the boys who wrote the book Our America lived. The site was one block from his high school, and he was reading Our America in his 9th grade English class—a brilliant teaching strategy. He later told me that ChiArts High School is housed in the building that was the neighborhood’s school, and LeAlan Jones and Lloyd Newman both went to school in that building. When a teenaged grandson tells you to read something, you listen. And I was blown away by the book. 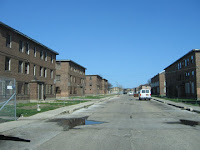 Ida B. Wells was one of the largest housing projects constructed in Chicago and consisted of 2 and 3-story brick apartment buildings which were not necessarily bad in and of themselves. However, they were arranged in a configuration that created numerous hidden spaces and pockets between buildings where drug dealing and violence could occur. The site features vast internal spaces which were hidden from view and isolated from the city streets. Two large apartment buildings were constructed on neighboring sites. This public housing project was built to house poor African Americans and was not demolished until 2005-2006.
David Isay, a journalist, wanted to do a documentary about life in Chicago’s notorious projects, and someone suggested that he do it through the voices of the children who lived in a project. LeAlan Jones was a precocious 13-year-old who attended a nearby school, although he didn’t live in the projects. Isay approached Jones and his friend Lloyd Newman, an Ida B. Wells resident, and together the three made a NPR documentary called Ghetto 101. The boys told the story of their daily life in the ghetto and interviewed friends and neighbors about their life experiences. It was on NPR in 1993 and won many awards.
A year later, a 5-year-old boy was thrown from the 14th floor of the high rise by two boys, 10 and 11. The rumor had it that candy was the reason for the killing.  LeAlan and Lloyd got out their recording equipment again and tried to discover the reason behind the death. This project took a year to develop, and the boys were able to interview the boy’s mother, the Chairman of the Chicago Housing Authority, and the father of one of the assailants. This documentary, called Remorse, won the Peabody Award for excellence in journalism.

Both interviews are combined in the book, Our America , which was published in 1996. It remains one of the clearest pictures of life in the ghetto, certainly the lives of its children. With photographs by a young African American teenager, John Brooks, the book is haunting, revealing, and heart-rending. I was reminded over and over of an episode of The Wire in which one of the teen-aged drug dealers is in charge of several young children, who sleep together in an abandoned apartment. In the morning, he gets them up for school and sends them off with a juice box and a bag of chips to begin their day.  When Jones and Newman were attempting to interview people about the death of Eric Morse, the 5-year-old, they tried to talk to families in the upper floors of the building, near where the killing happened. Those families were living basically in the dark because they had boarded up their windows so no one could break in, and they didn’t allow their children outside.  The Library Journal says that the “authors reveal how disenfranchised from mainstream America the ghetto has become.” Another reviewer calls the book is “part journalism, part activism, and part reflection.”
Jones’ final entry in Ghetto 101 says, “…we want to give you kids in America a message: Don’t look at ghetto kids as different. You might not want to invite us to your parties, you might think we’ll rob you blind when you got your back turned. But don’t look at us like that. Don’t look at us like we’re an alien or an android or an animal or something. We have a hard life, but we’re sensitive. Ghetto kids are not a different breed—we’re human.”
When I asked Maxwell about the biggest impression he got from Our America, he said that he couldn’t get over how accustomed the people of the neighborhood were to their poverty, and how they adapted to the life of the ghetto. He also agreed that they lived in a very small world inside a very big city.
There is a large field behind the school where Jones and Newman went, and now where my grandson goes. In the first chapter of Our America, the boys talk about a shooting that occurred in the field behind the school. Last week, there was a shooting in that same field during school hours. It has been almost 20 years since Our America was written. Has anything changed?
Here is a link to the audio documentaries Ghetto 101 and Remorse:  http://soundportraits.org/on-air/ghetto_life_101/
This is a You Tube video of the neighborhood made by a teenager, shortly before the buildings were demolished. There are glimpses of Maxwell’s school: http://www.youtube.com/watch?v=IecYC1vk2C8
LeAlan Jones ran for the senate in 2010 as a candidate from the Green Party. The following is an article about his candidacy in The Chicago Reader:  http://www.chicagoreader.com/chicago/from-ghetto-life-101-to-politics-101-lealan-jones-senate-green-party/Content?oid=2634112
Here is a link to ChiArts High School, the public school for the arts in Chicago. It is located on the intersection of 35th St. South and Cottage Grove: http://chiarts.org
There was a Showtime movie based on the book which aired in 2002. I could find it on IMDB, but I wasn’t able to find a source where it could be accessed.
Posted by Miriam Downey at 10:34 AM

I thought where i lived was ghetto but reading the book had me realized there are different types of ghetto and no two people are the same.

The book Our America was great. I learned so much from reading it. It is such an inspiration to know that youg men were interested in telling the story of where they came from.

The book was amazing I recommend you read it.