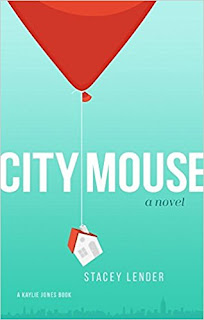 Jessica and her husband Aaron, both busy professionals, are living in a one-bedroom flat in Manhattan. With two toddlers, it is just too small, too crowded, and too lacking in privacy. Aaron brings up the possibility of moving to the suburbs, a notion that Jessica finds horrifying, but realizes that for the sake of the family, it may be the best choice. They find a modern Victorian in the village of Suffern, move in, and Jessica tries to adapt to suburban life. It's pretty hard to do because she has a long commute into the city four days a week, working from home on Friday. Aaron travels a great deal, and Jessica is never sure that this suburban life is all it's cracked up to be. Then Aaron and Jessica meet the neighbors and are quickly included in the social life of the young parents who make up the majority of the preschool community where their daughter is enrolled.

The women Jessica meets are primarily stay-at-home moms of young children, and frankly, are boring, catty, and mean-spirited. Yet, they are friendly and accepting of Jessica and her work schedule. Jessica tries to volunteer as much as she can, and she continues to seek out women with whom she has more in common, including a young Hispanic mother who is studying for a degree and is doing some fascinating research about Alexander Hamilton and Aaron Burr. (By the way, I found her research to be the most interesting part of the book.)

The women who take the major roles are extremely petty with few interests beyond their children and their partying. They aren't the type of people Jessica would have found interesting if she were living in the city—nor would she have spent any time with them. Are they typical of small town, suburban women? I don't really think so. At one point, after the rather shocking weekend trip the "friends" take, Jessica bemoans the fact that she didn't work hard enough to seek out more like-minded women. She settled and almost paid a huge price. Ultimately, the couple decides to move back to the city—this time to Brooklyn. Jessica muses: "I thought about how I'd been spinning in circles for so long, like so many mothers, trying to live a life that was supposed to be best for my kids without losing the essential bits of myself. " She wonders about how many other women were living rather unfulfilled lives "twirling desperate to find the perfect place to land."

My first inclination was that City Mouse was going to be like Big Little Lies by Liane Moriarty or Stepford Wives by Ira Levin. However, there is no murder to keep you reading like in Big Little Lies and, unlike Stepford Wives, the husbands play a very small role in City Mouse—in this case, the wives are the manipulators. While the climax of the book is scandalous, it is absolutely as small-minded as the rest of the book.

The value of City Mouse lies in its exploration of the notion of "having it all." If you have trouble finding your place in a culture that seems alien and shallow to you, is it possible to have it all? On the other hand, is suburban life as bad as Lender implies? My thinking is that any community has both the good and the bad, and a discerning resident can find like-minded people virtually anywhere.

I was interested in an item on the PBS News Hour last night that discussed a group of women in rural West Virginia, who are defying the prevailing wisdom of their community and are speaking out regarding the policies of President Trump. Jessica, the City Mouse, might have found some alliances there.

Stacey Lender, the author of City Mouse, is a marketing executive for entertainment brands, a career very similar to her character Jessica. Unlike Jessica, however, she lives in Manhattan with her husband and two daughters.

Posted by Miriam Downey at 3:37 PM