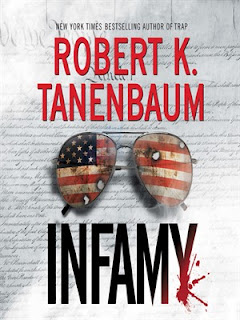 This thriller is part espionage, part political intrigue, part government corruption, and part legal procedural. Infamy sets out to please everyone except those who like character-driven novels. You aren't going to get to know any characters in Infamy by Robert Tanenbaum. But that's not the point. The point is the plot.
I had never met New York District Attorney Butch Karp—although he has appeared in many other novels by Tanenbaum. His wife, Marlene Ciampi, who usually helps to solve the crime, only appears in the periphery of this episode. In this case, Karp is prosecuting an army veteran who has killed an important army Colonel in cold blood in the middle of Central Park. But that's not all. The perpetrator says that he was set up, and there is a conspiracy afoot. Well, Karp, who seems to have a finger in every convenient pie, knows something about this conspiracy, code named MIRAGE. His daughter, Lucy, just happened to be at a site in Syria where some bloody murders in the name of MIRAGE went down. How are the murder and MIRAGE connected?

But oh, there are more coincidences. It seems that a wealthy businessman, Wellington Constantine, is mixed up in this somehow as well. He keeps a daily journal conveniently kept in his house that talks about MIRAGE. He also has an unfaithful wife, and a murderous assistant. And wonder of wonders, the man Constantine's wife is having an affair with just happens to be Richie Bryers, who played basketball with Butch Karp in high school.  (This, by the way, just seemed too coincidental and contrived to me. Does it to you?) Then, of course, there is the White House that somehow seems to be involved in the whole mess, although Tanenbaum doesn't implicate the President in MIRAGE. He also doesn't explore how high-up the plot goes. The plot is a perfect s--t storm.

Regarding characters, the only interesting character is a sexy Russian spy named Nadya Malova, and she is the one who held my attention the most. She appears several times, most prominently in the courtroom scenes that end the book. If this were in the movie, I would want to play her.

Thank goodness, we finally arrive at the courtroom scenes; first the murder trial in the Central Park killing and then in Wellington Constantine's conspiracy to murder trial. It is in the courtroom scenes that Tanenbaum shines, and I guess this is why people read his books. This last third of the book was really quite good. The litigation scenes move quickly and expertly, and Karp's prosecution was foolproof, at least in the opinion of a lawyer/reviewer. Read his review—it's good. 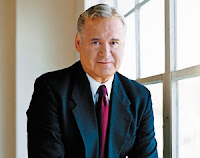 Robert K. Tanenbaum is one of the country's most successful trial lawyers—he has never lost a felony case. He has been Bureau Chief of the New York Criminal Courts, ran the Homicide Bureau for the New York District Attorney's Office, and served as Deputy Chief Counsel to the Congressional Committee investigations into the assassinations of President John F. Kennedy and the Reverend Dr. Martin Luther King Jr. He has taught Advanced Criminal Procedure at his alma mater, the University of California at Berkeley, Boalt Hall School of Law. His previous works include the novels Fatal Conceit, Bad Faith, Tragic, Outrage, Betrayed, Capture, and Escape; and three true-crime books, Echoes of My Soul, The Piano Teacher: The True Story of a Psychotic Killer, and Badge of the Assassin.

I received Infamy from the publicist. She sends me great books.
Robert Tanenbaum's website.
Posted by Miriam Downey at 7:55 PM