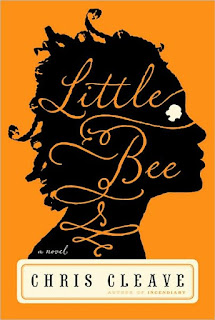 by Chris Cleave
New York, Simon and Schuster, 2008
271 pages     Fiction
I finished reading Little Bee by Chris Cleave totally breathless—my heart caught up in my throat. I don’t know when I have read a book where I cared so completely about the characters, what had happened to them, and what was going to happen to them.
Little Bee, a young Nigerian teenager, and her sister meet Sarah and Andrew, a young British couple, on a beach in Nigeria; Sarah and Andrew are on an ill-timed vacation, trying to salvage their marriage, and Little Bee and Nkiruka are running for their lives. Although we don’t find out until half way through the book what happened on that beach, every twist of the plot is dependent upon that fated meeting.
Most of the story takes place in London and environs two years after the meeting on the beach. Little Bee has made her way to England, been in detention for two years, and unceremoniously dumped out in the countryside. She finds Sarah on the day of Andrew’s funeral—Andrew committed suicide, never having come to grips with what happened on that beach. The two women form an unlikely alliance to protect each other and take care of Charlie, Sarah's four-year-old son.
These are remarkable women, each in her own way. They are survivors. Charlie is a survivor, too; he has taken on the persona of Batman and has in his four-year-old way separated the world into “baddies” and “goodies.” For Sarah and Little Bee, there can be no such clear-cut demarcation.
Sarah says that “she has lost the habit of happiness.” As she interacts with Little Bee, whose outlook on life, even at her young age, is immeasurably more upbeat than Sarah’s, she bemoans her moral turpitude and compromise. She says, “Compromise, eh? Isn’t it sad, growing up? You start off like my Charlie. You start off thinking you can kill all the baddies and save the world. Then you get a little bit older, maybe Little Bee’s age, and you realize that some of the world’s badness is inside you, that maybe you’re a part of it. And then you get a little bit older still, and a little bit more comfortable, and you start wondering whether that badness you’ve seen in yourself is really all that bad at all.”
Little Bee is much more pragmatic about the greyness of the world in which she lives. She has seen the “baddies,” and chillingly, she is always trying to figure out how she will commit suicide if they come to get her. She admires people with scars because she knows that they have survived. Yet when the men actually do come to get her she says, “…something has survived in me, something that does not need to run anymore, because it is worth more than all the money in the world and its currency, its true home, is the living…the secret irresistible heart of the living.”

Little Bee is brilliantly conceived and written. Everything rings true without one false note. The reviewer in the Washington Post calls Cleave’s writing “restrained, diamond-hard prose.” His view is sympathetic but clear-eyed, emotional but not cloying. Although the book is political, the politics are so tightly wound into the humanity of the characters that the reader is not aware that there is any political agenda at all. The New York Times’ reviewer concludes: “Cleave uses his emotionally charged narrative to challenge his readers’ conceptions of civility, of ethical choice.”

When I was rather breathlessly telling my husband about Little Bee, he suggested that it sounded like a companion to Strength in What Remains by Tracy Kidder, and indeed it could be a fictional counterpoint to the story of an American immigrant from Burundi.
As you can tell, I loved Little Bee. My book club is going to discuss it next week, and I am so grateful that one of our members suggested it. It is one of the best books I have read in a very long time—probably at the top of my list for 2011.
The New York Times review: http://www.nytimes.com/2009/05/17/books/review/Elkins-t.html
The review in the Washington Post:
http://www.washingtonpost.com/wp-dyn/content/article/2009/02/24/AR2009022403232.html
Chris Cleave's website with a trailer for Little Bee: http://www.chriscleave.com/littlebee
Posted by Miriam Downey at 2:14 PM

Hi Miriam,
I'm so glad to have found a reader who has enjoyed Little Bee as much as I have. I was surprised not to see this book in every bookstore - it certainly deserves much more publicity.

hello. you called the guy alexander in the third paragraph and then in the fourth you hanged it to Andrew. his name is andrew. please edit this post

changed it to andrew

Thanks anonymous friend. I have read this post several times and never caught it.