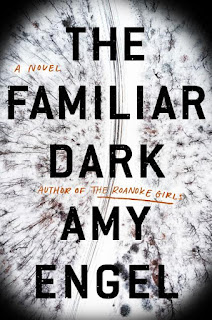 Just when I thought I could settle down a little and read something fun, I picked up The Familiar Dark to read and review. Incredible book but very shocking and unnerving. One reviewer called it rural noir, and it most definitely is that. I kept thinking about Once Upon a River and Mothers, Tell Your Daughters by Bonnie Jo Campbell and Hillbilly Elegy by J.D. Vance. If anything The Familiar Dark is grittier than these other tales, both fictional and autobiographical.

Amy Engel’s setting is small town Missouri in the middle of the Ozark mountains. Eve is a 30-something single mother of a 12-year-old, Junie. She is a waitress in the local diner. The opening scene really grabs your attention when Junie and her best friend, Izzy, are discovered murdered at the neighborhood playground. Who would kill two pre-teen girls? While the narrative is third party, the story is told completely from the perspective of the devastated and grieving Eve. She sets out to take revenge on whoever killed the girls.

When the back story emerges, we find that Eve and her brother Cal raised themselves. Their mother is a rather stereotypical trailer-trash character, drinking, smoking, selling and using meth. One reviewer called the mother, a “pit bull.” Most of Eve’s inner dialogue is concerned with her relationship with her mother and her brother, who has become a local police officer. Much of her anxiety stems from her inability to escape her past and the corrosiveness of the community in which she was raised. She thought that by being a good mother, she could help Junie escape. The major question of the novel is “Can anyone escape their background? The way they were mothered?”

For several years, I lived with my family in small town Michigan. The village was just as small as the village where Eve, Cal and Junie were raised, but because it was on a major highway, it was much more open to the wider world. At the same time, it was very confining. I remember the exact moment that I realized that this atmosphere was much too small and confining for my children. I saw that our children were not going to have as much intellectual stimulation as we wanted, and I convinced my husband, who had been raised in a rural environment, that we had to move for our children’s sake. The benefit of small town living is that everyone knows you; this also serves as the major weakness. This dynamic plays out well in Engel’s village.

The Library Journal reviewer says, “Not just a fine thriller but a fine character study, plumbing family and particularly mother-daughter relationships and showing Eve, her mother, and Izzie’s mother, too, as women unbendable as oak.” I could really relate to this analysis, because The Familiar Dark, in many ways, moves beyond noir to explore the depths of relationships. It is a worthwhile read under any circumstances, and if you can find a warm, restful spot in the midst of a pandemic, an excellent addition to your library. It will be released next week.

By the way, once I read the book, I really appreciated the title. Sometimes we embrace the dark (whatever the “dark” is) because it is something we know. Sometimes it is better than stepping out into the light. Here is Amy Engel’s website.
Posted by Miriam Downey at 1:04 PM