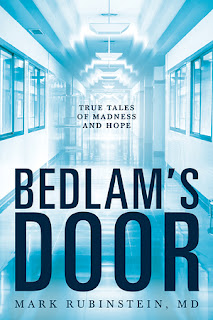 Dr. Mark Rubinstein is a physician and psychiatrist, but in his heart, he is a storyteller. He has published several novels and medical nonfiction works over the years in addition to practicing psychiatry. Bedlam's Door, his newest book, is a series of reminiscences about patients he encountered through his years as a psychiatric resident and then in his private practice.

Each chapter of Bedlam's Door is a case study, from a Hungarian man who thinks that he is the King of the Puerto Ricans, to a suicidal woman suffering from post traumatic shock following the death of her husband.  Each story is unique, heartbreaking, and eloquently told. Rubinstein says: "It's really quite ironic. I fell in love with psychiatry because each patient—through sharing human commonalities—has a uniquely personal story."  Following each case study, Rubinstein outlines the diagnosis and the pathology, or the reason for the treatment. Often he offers a postscript to the story about how the patient fared following treatment. The after words are extremely valuable to help the reader understand the case.

My favorite story concerns a  man named "Mr. Smith" who was brought to the hospital by the police. He had been hanging around a famous New York hotel, saying that he had plenty of money and that he wanted to rent a suite at the hotel. He was dressed in expensive, although worn out, clothing and was carrying a large briefcase and said that he had a lot of money inside. He looked around the hospital and decided that instead of the fancy hotel, he wanted to rent a room in the hospital. Dr. Rubinstein played along with the charade all the while trying to assess Mr. Smith's mental stability. But it was not until Mr. Smith opened the briefcase to show the money—thousands of dollars of Monopoly money—that Dr. Rubinstein concluded that Mr. Smith really did need a room in the hospital.

Patricia, the suicidal woman suffering from post traumatic stress following her husband's death, had been under treatment for several weeks when  Dr. Rubinstein visited her and found her much calmer and more in control of her life. He mentioned that what she had needed was a chance to begin healing. Her response spoke volumes. "Thank you for not letting me make a permanent decision in a temporary frame of mind." 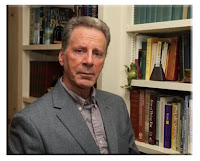 The tag line of Bedlam's Door is True Tales of Madness and Hope. Rubinstein illustrates graphically how there is almost always hope—hope that comes with intense counseling and balanced medicine. This is the great value of the book; while the stories are fascinating, the upbeat tone and implicit sense of hope pervades everything.

I have been trying to think about who benefits most from reading Bedlam's Door. Certainly it would be valuable for medical students deciding whether to pursue careers in psychiatry, but it would also be valuable for families facing psychiatric treatment for loved ones. Dr. Rubinstein's message of hope will resonate in many settings.

Linda Fairstein, a well known novelist, recommends Bedlam's Door. “Bedlam’s Door is a riveting read about madness and mental illness. Mark Rubinstein—award-winning novelist, physician, and psychiatrist—is the perfect guide for this journey through the mysteries of the mind, from despair to hope, and he does it in brilliant form. If you enjoy psychology, crime fiction, a good story, and forensics, this is a must-read book.”