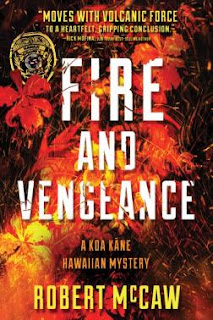 Chief Inspector Koa Kāne is called to a horrific scene. An elementary school built just the previous year on the site of an inactive volcano vent on the island of Hawaii has exploded, killing and injuring everyone in the school. As they investigate, he and his junior detective Piki discover that the contractors, architect, and others involved knew that the construction was dangerously and inadequately built, but they had proceeded anyway. Then, to add to the mystery, the contractor and architect are both murdered. What is going on here?

In my review of McCaw’s second Koa Kāne mystery, Off the Grid, I complained that McCaw spent way too much time bringing the reader up to date on Kāne’s backstory and the plot line of the first book, Death of a Messenger. I think that the author has done a much better job this time of reminding the reader about Koa’s pursuit for justice, laced, as it is, with his guilt and his past. We face this specifically when he does what he can for his imprisoned brother who has a brain tumor. All of this is a complicated mess that he has to face and attempt to solve.

We are continually reminded of the role greed, corruption, and government interference have in public works as Kāne plods his way through the case. Kāne is a genuinely good man, and the reader is constantly reminded of his integrity—even as he faces his greatest guilty secret. The final lines of the book do not give away any of the plot, but speak to the man’s integrity. “He would never escape the guilt he felt for what he had done, but in the tangled world of human behavior, his guilt had once again driven him to find justice, not just for the keiki (children) and kumu (staff) of KonaWili (the elementary school) but for his brother, mother, family, and kupuna, his ancestors." 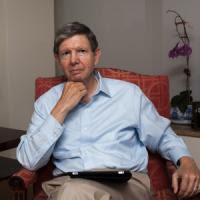 The other major thing I like about this series is the setting. Lots of illusions to Hawaiian culture, food, sites, as well as information about the volcanoes that continue to threaten the islands. Fire and Vengeance is a compulsive, satisfying adventure.

Here is Robert McCaw’s website.  His life story is as fascinating as his novels.